My interest in silkscreen printing led me to create images using stencils.  There is a long tradition of this technique in the visual arts; from ‘Pochoir plates’ (or stencils) used to create illustrations in French journals of the 1920s and 30s to today’s graffiti artists who use similar techniques, often on a far larger scale.

What is a Stencil?

A stencil is a thin sheet of card, plastic, or thin metal sheet with a design cut out of it.  Paint or ink is then pushed through the holes of the stencil onto another surface below to create an image.  Confusingly the resulting image is also called a stencil or stencil print.

It’s all in the planning

The use of stencils creates a graphic quality to my imagery.  The quality of line and shape in my original drawings is vital to the outcome of the final stencil. So whether I start with a quick sketches or work from a series of reference photos my drawings have to end up as linear images so that I can translate them into stencils.

When designing a stencil of a bird it is essential to consider which shapes to cut away and which to leave behind. It takes quite a lot of planning to design and cut a complex bird stencil.  If I cut out a shape that is an ‘island’ in my design it will fall out of the overall stencil! It’s essential to consider whether ‘bridges’ are needed in the design in order to keep the stencil as one whole piece.  In many of my artworks I cut different stencils for different colours so layering of colour and shapes has to be planned out too.

I also create stencils for much of the foliage and other elements of the imagery. These are generally cut by hand with large complex final bird images occasionally being done by laser cutter.  I often use other digital processes – scanning and image manipulation  –  to experiment with compositions and scaling before embarking on the final image. 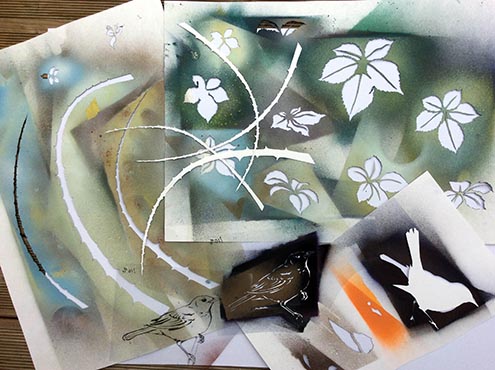 There’s lots of ways of printing a stencil.  For many years I’ve used spray paint which can create some lovely subtle colours. If covering a large area it is also possible to use a sponge roller. I’ve also used small sponges and stencil brushes to carefully stipple acrylic or other water based paint through the stencil.  It’s important to keep the sponges and brushes as dry as possible with just a small amount of paint used each time so that it doesn’t bleed under the stencil.  If the first application of colour isn’t strong enough you can always add more – but once it’s on you can’t remove it!

Stencils can be printed directly onto plain paper as in my works on brown paper.  They can also be printed onto all sorts of other flat surfaces.  Many of my more complex images are created by printing onto a mixed media background.

The key advantage of a stencil is that it can be reused to repeatedly and rapidly produce the same image or design.  It can also be flipped over to produce a reflected image.  Once I have created the stencils I like to work more intuitively, moving the stencils around the composition as it takes shape. Maybe even cutting additional stencils if I feel that more elements are needed as the composition takes shape.

This video shows the making of Blackbirds in a Bramble Thicket.  The idea for this composition came to me having watched Blackbirds at the bottom of the garden feasting on a bramble patch laden with berries.  The pair were fiercely guarding  ‘their’ bounty of fruit.

The composition was briefly sketched out and then I set about producing studies of blackbirds. As I am doing this I imagine them as stencils, drawing them with this in mind, keeping the images graphic in terms of clean lines and shapes.  As I am drawing I also think about the shapes of colour I will need and how the final, more linear image will sit on top of these colours.

I then wandered down the garden and made sketches of the bramble patch. Once the drawings are complete I cut the stencils from either acetate or thick paper.

I paint a background and then the stenciling begins.

I use a very rough sketch on tracing paper to help me place the stencils in the correct place within the whole composition.  But as you can see from the video this is not an exact science!

When stenciling the birds I am far more accurate and use an acetate photocopy of the bird drawing to register each stencil of each bird so that it lines up correctly.

This image was created with spray paint and carefully sponging acrylic paint through the more complex bird stencils to ensure I capture the finer details.

I’m currently exploring new ways of creating and printing my stencils and experimenting with how the paint is applied.

Who knows where this will lead.